Unitron advertisements in Sky and Telescope, and their outstanding catalogs were legendary.  They are almost as memorable, and as sought after, as the telescopes themselves!  Note the quote from the Amateur Telescope Making Advertisement article that can be found on the Links/Information page:

“Unitron advertisements in contrast were blatantly aspirational and subtly conformist, announcing Unitron as the largest selling brand, the highest quality brand, the most popular brand (“the ‘star’ of the star party”), the brand with the most accessories (including the UniHex rotating eyepiece selector), the brand everyone is giving for Christmas, and most importantly (because a Unitron was expensive) the brand that offered attractive terms of down payment and financing. Remarkably, a single Unitron ad could simultaneously speak to the science minded teenager’s expectations of his parents, the parent’s self perceived obligation to their upwardly mobile children, and the adult’s delayed gratification of his own childhood desires:

The shadows that shiver and shake on the TV screen are shivering and shaking in somebody else’s living room tonight. Johnny has discovered something new.
He’s traded the fleeting, flickering “thrills” of the 24 inch screen for the timeless excitement and majesty of the night sky. …
He has, in short, discovered astronomy.
Nothing better could happen than what happened to Johnny. And it happened simply because someone took the trouble to awaken, nourish and satisfy a lifetime of curiosity in Johnny by making him the gift of a fine telescope.
Someone, not so long ago, gave Johnny a Unitron.

Unitron ads frequently featured children and women as models; one ad even configured telescope components to make a zoo of fantastical animals. Astronomy had become as much a family as a solitary recreation, embraced by the rising class of affluent, educated and suburban professionals in management, science and technology, eager to impart a love of science to their children. This was also an era when even city dwellers enjoyed skies dark enough to make astronomy exciting, a backyard recreation ideally suited for a working father and his student son.”

According to John Coyle, it was Harry Keys, the General Manager hired by Larry Fine, who was responsible for this creative advertising and marketing in magazines such as Sky and Telescope and Popular Astronomy; and also trade shows.  Telescope models were included at the trade shows primarily as “eye catchers” for Unitron’s primary product, industrial microscopes, which made up more than 90 percent of their business.

Attached are the beginnings of a collection of  catalogs; price sheets are included on the next page:

– 1987 Polarex-Unitron Catalog: To be uploaded 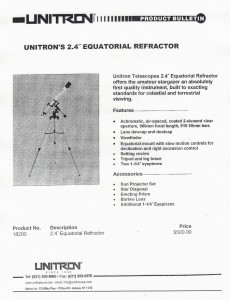 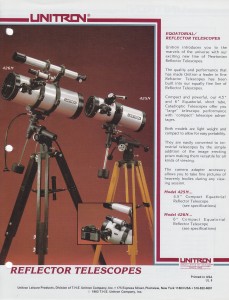 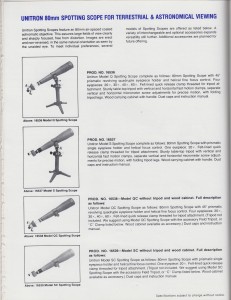 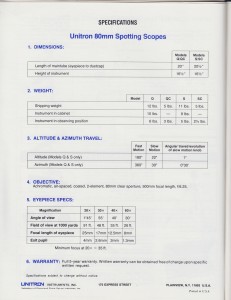 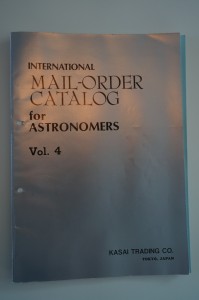 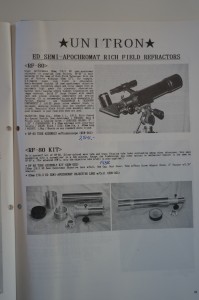