In 1975, Unitron USA was acquired for the reported sum of $2.4M by Ehrenreich Photo Optical Industries and moved from the New England area to Woodbury, New York.   According to Philip Fine, Lawrence Fine’s Son, his Dad sold the business because he was tired of constantly dealing with “the same old problems; the same ones for 20 or so years.  These included dock strikes, finding people to work, and problems with the yen exchange rate.  He just wanted to do something different with his life.  In retirement my Dad took up scuba diving, flying, and continued studying Japanese.” 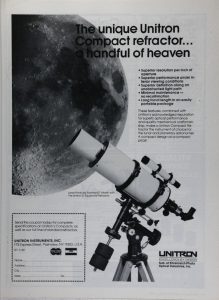 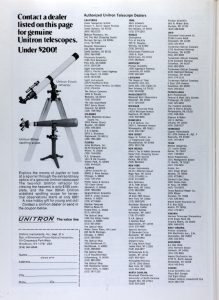 Quite tragically, both Lawrence Fine and his wife Ellen were killed in a plane crash near Rimouski, Quebec, Canada on 3 August 1978.  Lawrence Fine was flying the plane.  The accident occurred in bad weather.  They are buried at Sharon Memorial Park, Sharon, Massachusetts (Beersheba Section, plots 75-1 and 2); their funeral service was held at the M.I.T. Chapel. 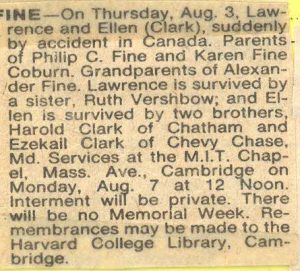 In 1983, The Leisure Products Division was established as a division of Unitron USA with the goal of bringing the same “excellence by design” to the area of optics in the consumer market in addition to its high quality telescopes. The Leisure Product Division represented a new and exciting line of optical products designed to enhance the needs and enjoyment of the consumer market in the product lines of binoculars, telescopes, theater glasses, magnifiers, hobby microscopes, sports glasses, as well as many other fine quality optical products.