Section 1, “The Glory Days”, will cover the period beginning with the earliest known information on Nihon Seiko, and continuing until the sale of Unitron USA in 1975.

The When: The most definitive documentation of the closure of Nihon Seiko was a September 1992 letter to Unitron USA.  Per Peter Indigro, current Senior Vice President, Unitron USA, in the letter Nihon Seiko advised they were “discontinuing production”.

In spite of this, the existence of Unitron products listed in a 1993 Kasai Catalog, and the recent disclosure that Nihon Seiko facilities existed as late as 2006, raise questions as to what involvement the company had in the astronomical business beyond 1992.

The Kasai Catalog includes not only a Unitron branded 80mm ED Semi-Apochromat Richfield Refractor, but a wide selection of Unitron branded eyepieces and several viewfinders.

The Why: From what I can determine there are at least three reasons Nihon Seiko was unable or unwilling to continue competing in the astronomical market.  I have uncovered evidence that to some degree efforts were attempted to overcome these obstacles.

– Loss of skilled lens craftsmen: The achromatic lenses were manufactured by a small cottage industry in Japan. Interviews with John Coyle and Larry Hands, and quotes from Roland Christen, emphasized the impacts of the loss of these critical resources through retirement and attrition.

– Unwillingness to deal with Chinese competition: The entry of less expensive Chinese manufactured telescopes together with the increasing prices of Nihon Seiko refractors resulted in decreasing sales.  Nihon Seiko introduced several new models (Model 105, Model 131C and 132C, and the Ed-U Scope Series), as well as at least one Chinese model, the Model 128, a 60mm, f/15 on a less expensive equatorial mount.  Unitron USA’s efforts at marketing the Chinese scopes failed based on the inferior quality. 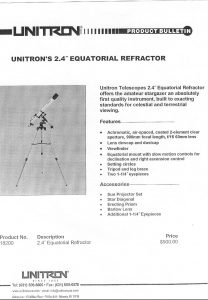 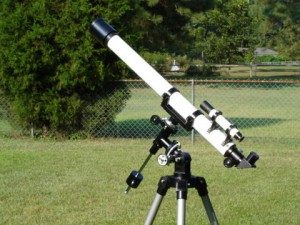 – Lack of resources to introduce apochromat telescopes: As apochromatic telescopes were being introduced by other brands, Nihon Seiko initiated efforts to acquire apochromat lenses and manufacture their own line of telescopes including 4 inch, 5 inch and 6 inch, f/10 apochromat refractors.  My research indicates they made an honest effort to reach out to several credible sources for lenses but were unable to obtain a supplier.

The 80mm, f/6.3; ED Semi-Apochromat Richfield Refractor included in the 1993 Kasai Catalog is the only example of one that was actually manufactured. 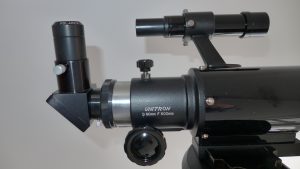 Unitron USA opened communications with Thomas Dobbins Engineering as a possible source for apochromat refractors in 1986.  According to Tom Dobbins: “That is an image of a Dobbins Instrument Company refractor that was photographed at the Unitron facility circa 1986. I was approached by the Unitron folks (not Nihon Seiko) to supply large (5- and 6-inch) instruments, but nothing resulted from the collaboration.” 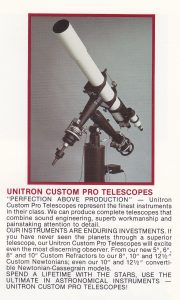 Bottomline:  By the early 1990’s over 95 percent of Unitron USA’s sales were industrial microscopes; they were not motivated to deal with any of the obstacles addressed above and were most likely not pressing Nihon Seiko to do so.