Nihon Seiko Kenkyusho, Ltd. based in Tokyo was established at least as far back as the the mid 1930’s, marketing achromatic refracting telescopes based on a Zeiss type E air-spaced doublet achromat lens design;  they marketed scopes up to at least 125 mm aperture under the POLAREX or SEIKO SCOPE brand names

According to Roger Re (owner of R.V.R. Optical, now deceased) they were produced under the guidance of Mr Hatsukawa, Sr

The Nihon Seiko telescopes were marketed in most major markets, and under several trade names (MERIDIAN, POLAREX, SEIKO SCOPE, UNITRON, WELTBLICK) until the discontinuation of routine telescope production in 1992

Lawrence A. Fine was born on September 12, 1922.  He was a Harvard graduate and his wife Ellen was a Radcliffe graduate

In early 1950 Lawrence Fine and his wife went to Japan looking for high quality products to market in the U.S.A; the company they began dealing with was Nihon Seiko Trading Company, a company that manufactured refracting telescopes

Upon return to the U.S.A. Lawrence Fine began importing telescopes as the United Trading Company; he set up an office and show room at 204-206 Milk Street in Boston, Massachusetts

He hired Al Hogle, who owned and operated a small novelty store in Acton, Massachusetts, to manage his show room; Al Hogle previously sold small telescopes and had an astronomical background; Al Hogle remained part of the company until 1975

Lawrence Fine was twenty-nine years old when the first UNITRON advertisement appeared in the October 1951 issue of Sky and Telescope magazine; it features thress models: the NS 127, NS 114, and NS 128

Lawrence Fine registered the UNITRON trademark in the United States under United Scientific CO, 204 Milk Street, Boston, Massachusetts; he filed the registration on March 22, 1954 with first commercial use on February 25, 1952

The UNITRON brand name was derived from the company’s largest supplier of microscopes, UNION OPTICAL

In July 1952, it changed to United Scientific Company (listed as affiliated with United Trading Company)

In the early 1960’s United Instrument Company expanded into the microscope line through the KUNOH TRADING COMPANY, and UNION OPTICAL in Tokyo, Japan.  This included the importing of the first inverted Japanese microscopes into the United States

Due to this expansion of products, Unitron hired Harry Keys who was product manager for Stereo and Biological microscopes for Bausch & Lomb of Rochester, N.Y. Mr. Fine made Harry Unitron’s General Manager

As a result of this expansion, Harry hired Jack Tague for quality control, and John Coyle for sales, both came from Bausch & Lomb. He also hired Jerry Dill from Brown Scientific. Jerry would eventually take over telescope sales after Unitron’s move to Long Island. Ed Mostowicz took his place after Jerry retired 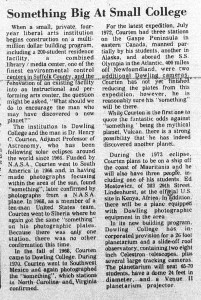 In January 1953, Unitron introduced the first full page spread showing all its models and announcing that the 3” Photo-equatorial would be coming soon

In March 1953, they announced the Model 145 3” Photo-Equatorial with a price of $550; and also announced a 4” Equatorial would be coming soon

In May 1953, the Model 152, 4” Equatorial was announced as leading a line of nine Unitron Models

January 1955 prevue’s the “first of a series of test models of the forthcoming UNITRON 6 inch refractor”; the Rotary Eyepiece Selector: as well as the weight driven clock drive for the 4 inch Equatorial Model 155

The Model 166, Pier mounted 4” Photo-Equatorial was previewed on the back cover of the June, 1955 issue of Sky and Telescope; October 1955 issue announced it went on sale

September 1957, there is the photo of Hans Arber, the Swiss Astronomer shown with the pre-production model of the 6’inch Unitron in Manila, Philippines; “the limited number of custom built Unitron 6” Refractors now in active use are about to be joined by regular production models; in the advertisement it refers to an article in the July, 1957 issue of Sky and Telescope in which Hans used the 6” to take photos of the Mercury Transit

October 1957, back cover of Sky and Telescope is the famous comparison photo of the 6” and 4″ without the female model; referred to as the BROBDINGHAGIAN; “Delivery schedule to begin in a few months. The price will be in the neighborhood of $5,000

In the 1970’s Unitron added compact reflector telescopes, spotting scopes, and leisure products to the line. It also at that time expanded its microscope line

In August 1971 the President, Nihon Seiko was E. Kobayashi; this is based on a letter that was forwarded to Carsten Deberitz, Oslo, Norway

December 1971 was the last issue of Sky and Telescope that Unitron had the back cover; Celestron SCT’s took it over in January 1972

Lawrence Fine sold off the business in 1975 to Ehrenreich Photo Optical Industries, Inc for the reported sum of $2.4 million

Lawrence and Ellen Fine died on 3 August 1978; they were killed in a private plane crash that Lawrence was piloting; it occured over the Canadian forest

Lawrence and Ellen Fine are buried at Sharon Memorial Park, Sharon, Massachusetts; their funeral service was held at the M.I.T. Chapel on 7 August 1978

In 1983, The Leisure Products Division was established as a division of Unitron with the goal of bringing the same “excellence by design” to the area of optics in the consumer market in addition to its high quality telescopes

ED-U-SCOPE was registered for use starting in June 1985