Since the Sky High Observatory rescue operation two years ago, the telescope has been standing quietly in my basement.  Maybe a shame for such a telescope, but I don’t have the right property to build an observatory.  But at least it was saved from the elements, and it is now being well taken care of.  I see my role in this telescope’s history to see to it that it is saved for the future.  In that regard my thoughts at the moment are sometime in the future to contact the Norwegian Museum of Science and Technology and find out if they might be interested in taking care of it and using it in a display.  It had also been my plan for a long time to have a first light… well at least first light since the 1980s.  So on Thursday, 17 March 2016, it was going to happen. I had an agreement with my friend Stig to dismantle the telescope and set it up outside my house.  Stig is familiar with the telescope, since he was the one who helped me with dismantling it at Sky High Observatory and transporting it to Oslo. The first light date was not a coincidence.  On that date both Jupiter and a half moon were well placed for observation.

According to the Polarex Unitron catalog, the total weight of the model 136F is 300lbs/140kg, so there had to be at least two people for the job of dismantling and assembly outside. We broke it down in four pieces, and the job was done in 30-40 minutes. In order to document the process, I had put up a Brinno TLC2000 time lapse camera to record the event.  At the bottom of the article you can find a link to the video on YouTube. The view in the time lapse is looking southeast, and you can see Oslo and the harbor in the background.   When we started out the weather looked promising. The forecast was good. We had not studied any satellite photos and animations, but were rather confident that the weather would cooperate. It had been clear and sunny all day. We dismantled the telescope in the basement, and started to bring the different pieces up in front of my house. First the bottom plate, then the pier, the equatorial head, and at last the tube. The equatorial was heavy, but the tube was also a full load, even if we had taken off the 3 inch guide scope. As you see in the time lapse, we kept all the finders and guide scopes on the tube. We could have removed all but one finder, to reduce weight, but I wanted it to look perfect, so they stayed on. It is a beautiful instrument that really looks like an astronomical telescope. Another reason for not removing the finders is that wing nuts are very fragile, so I avoid using them too much. 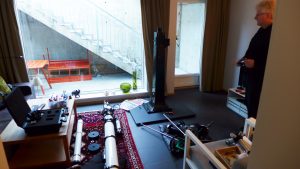 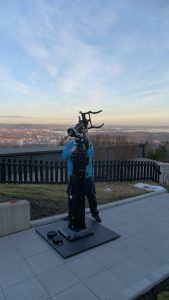 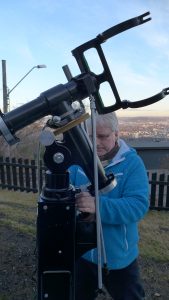 During the setup, we had not paid much attention to the weather. But when everything was ready, we saw that the clouds had started rolling in from the north. You can see this clearly on the time lapse video, the clouds came in from the left. Well, how could this be a surprise? This telescope, as with any other big instrument, is a great cloud attractor.  We could see that we had not much time for observing, so we had to speed things up. After taking some pictures of the telescope, we started out with a 1,25″ TeleVue Diagonal with a 24mm Explore Scientific 68 degree eyepiece. To our surprise, we could not reach focus; the extension tubes were too long. We were in a hurry, because the clouds were rolling in fast, so I put the Polarex Erfle 20mm in straight through mode (that was how we found the telescope back in the observatory). Then we reached focus, and could observe the moon. In that setup I took a few pictures of the moon with my iPone 6S. 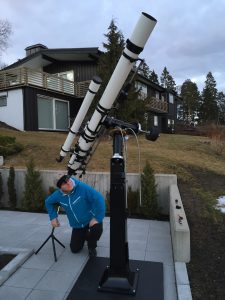 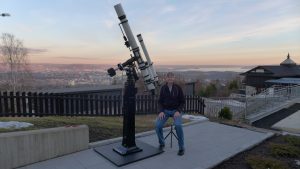 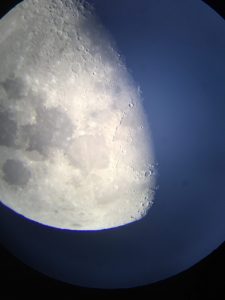 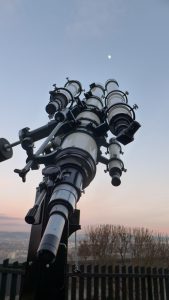 After that we put in the rotary eyepiece holder with the 60mm Kellner eyepiece, and reached focus. We had a quick look at the moon through the 60mm, and the impression through that eyepiece was mediocre quality. Well, we had not brought the telescope outside in order to test eyepieces, so that did not matter. Stig got a few minutes observing time holding the TeleVue diagonal with a 16mm Nagler in the opening of the telescope after removing one of the focusing tubes.  It was now clouded over, but as you can see in the time lapse the sky was clear low in the southeast. Since we did not find any solution to the focus problems we decided to carry everything inside again. When we had everything set up in the basement, we did find the solution to the focusing problem. It was possible to unscrew the outermost tube. That could be used in two directions. One end for 0.95 eyepieces and the other for 1.25 eyepieces; a smart solution, but in 1.25 mode the tube was too long and it was impossible to reach focus when using a diagonal.  After removing that multipurpose tube, it occurred to me that I could try out a 1.25 adapter I had bought for my 3 inch Unitron and it did fit!!! With that setup, it is possible to use a 1.25 diagonal with modern eyepieces and reach focus. 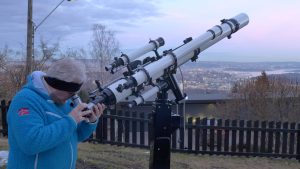 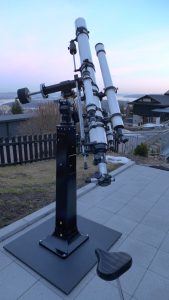 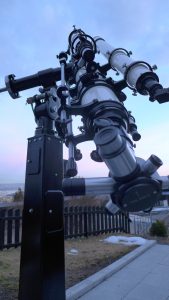 So what’s next? In all it had been a successful evening. We decided that this was a trial run. Now we know how to do this, so next time it will be much easier. On the next try we will study a lot of satellite images / animations to be sure of the weather, and I guess we will get three persons to do the job.  When Stig was going home and we went outside, it had cleared, no clouds in sight. We did not have the energy to start all over again. But the conclusion was clear, we would try again in one month when the moon was equally well placed in the sky. Jupiter would still be in a good position. As it turns out, one month later, it was bad weather around the date we had planned for second light.

OK, what was the verdict on the optics after maybe a total of  10 minutes observing time? We were only able to observe the moon and the lights on a TV tower.  To both of us the optics seem good, well collimated, and no obvious chromatic aberration. So it looks promising. This is as expected. Carsten, the original owner, was an expert, and I have never heard any indication that the optics were not as good as they could get. Carsten would never had accepted second best optics.  When we have the second first light I will update this article.