Introduction of the 6 Inch Unitron

The 6 inch refractor was the premier telescope of the Unitron and Polarex brands.  It was designed specifically for institutions and for the serious amateur.  Based on review of available documentation, primarily Sky and Telescope magazine advertisements, I have uncovered the following information concerning the introduction and availability of the 6 inch UNITRON.  This feature will be updated as additional information is made available.

The initial January 1955 advertisement previews “the first of a series of test models of the forthcoming UNITRON 6 inch refractor”.  It refers to it as a complete observatory installation incorporating every convenience for observing and astrophotography, referencing:  a 3” guidescope, a large viewfinder, and two astrocameras, about 10 eyepieces, a rotary eyepiece selector, and a spectroscope.

In September 1957 the first photo of Hans Arber, the Swiss amateur astronomer was shown with a pre-production model of the 6 inch Unitron in Manila, Philippines.  The narrative discusses the existence of “the limited number of custom built Unitron 6” Refractors now in active use” and that they are about to be joined by regular production models. 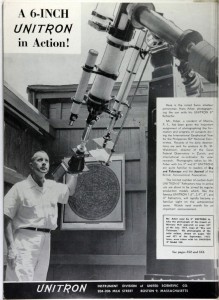 Apparently, Hans had been using the telescope for at least some months and had a photo published in an article in July 1957 in which he used the 6” to take photos of the Mercury Transit. 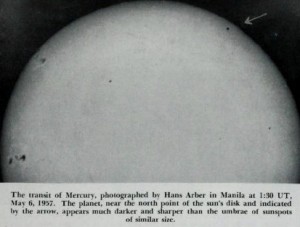 In August 1957 this drawing and description appeared which pretty accurately described the accessories that would be available when the models were later made available. 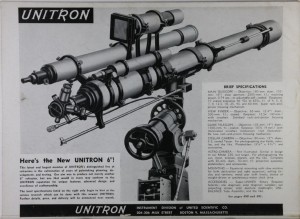 In October 1957 the famous comparison photo of the 6” and 4’ fixed pier mounted telescopes appeared without the female model. It refers to the 6 inch as the “BROBDINGNAGIAN.” It also states in the advertisement that delivery is scheduled to begin in a few months with a sale price in the neighborhood of $5,000. 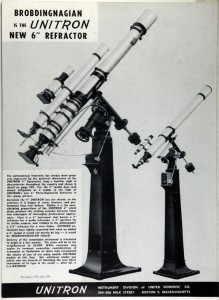 Finally, the 6 inch Unitron Models 600, 610, and 620 were introduced in April 1958.  The advertisement highlights the Astrocamera 330, the weight driven clock drive, and the two astrograph models.  In this same issue appeared the more familiar photo that displayed the fixed pier mounted 6” compared to a fixed pier mounted 4”, this time with the female male. 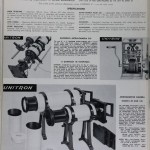 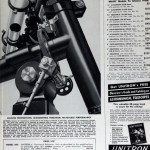 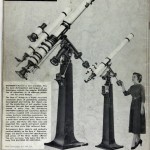 And very shortly in May 1958 appeared the advertisement enticing one to get behind the controls of one of these behemoth 6″ refractors!  The dual 6″ Optical Tube Assemblies (OTA) at the University of Connecticut Physics Observatory discussed under the Finds Page were procured about 1963. 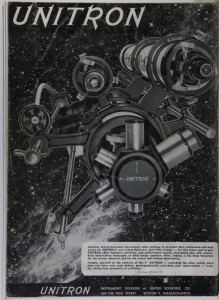 In March 1959 there was an advertisement pointing out the design features and quality of the Unitron mounts that are unique to the brand.  The photo was of the 6 ” Model. 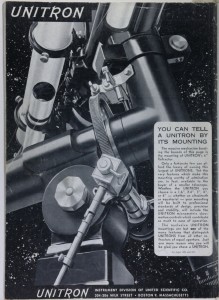 And as it appeared in the 1972 Unitron Catalog: 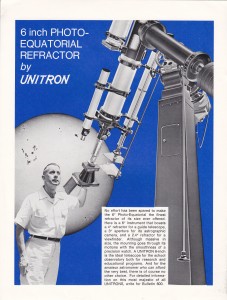 And the final known advertisement for the 6″ Unitron, January 1975…20 years after the first preview in Sky and Telescope magazine.  The 6″ Unitron at the Rafes Urban Astronomy Center discussed under the Finds Page was procured in 1978 and is thought to be one of the last manufactured. 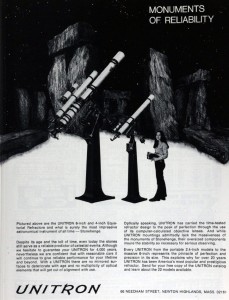 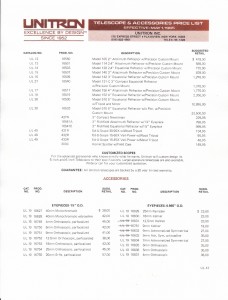 And in February, 1986 there was an advertisement in a Dealer’s Handbook for a line of Unitron Custom Pro Telescopes that ranged from 5″ to 10″ Refractors. 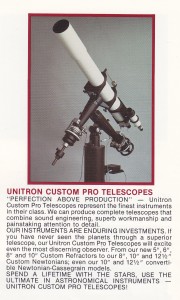