This is the story of Sky High Observatory in southern Norway, built by Carsten Deberitz in the early 1970s. 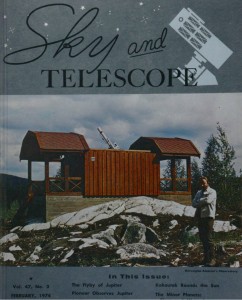 Carsten was born in 1945, and died too young in 2006. Carsten and his wife Grete were the leading figures in the management of the Norwegian Astronomical Society for many years. Carsten built his observatory, two hours’ drive north east of Oslo, and called it the Sky High Observatory. It was a rare endeavor in the 70s. It was featured in many national newspaper articles in the 70s and early 80s. The observatory had a Polarex (Unitron) 5” (127mm) refractor for astrophotography and h-alpha solar observations. Among amateurs, this was very expensive and advanced equipment in the 70s.  These old photos show Carsten at work…and the other telescope observing platforms…one with a C8 Celestron and the other with a 4 inch Polarex. 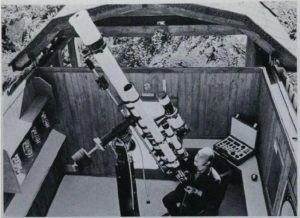 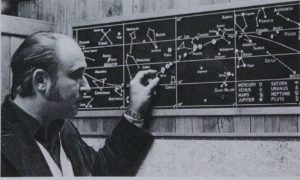 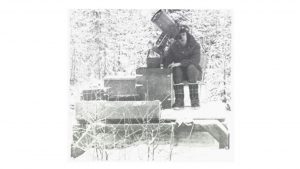 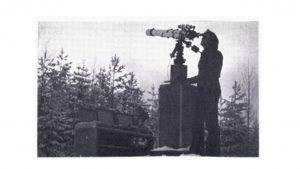 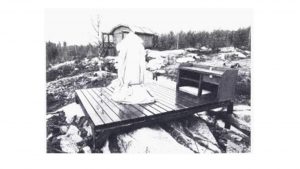 So, who am I? My name is Tore Engen, and I am a Norwegian amateur astronomer living in Oslo. I have been doing astronomy since the late 60’s as a kid. My interests are visual observation of deep sky, the sun (h-alpha and white light) and the planets.

This story starts in February 1974

Carsten was on the front page of Sky and Telescope in the February 1974 issue, standing proudly in front of his Sky High Observatory.  At that time, I was 15 years old, and the happy owner of a 3” (75 mm) equatorial Polarex Unitron. I had just started subscribing to S&T, and was of course very proud of seeing a Norwegian amateur on the front page, and drooling over the picture of the observatory and the 5” Polarex. 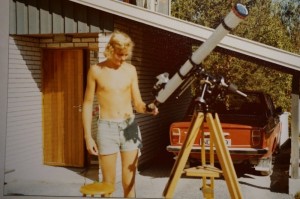 Then we wind fast forward exactly 40 years, to February 2014. One evening in late February, I started thinking about an ad I had seen in the Norwegian astronomy magazine “Astronomi” a year back. The ad announced the sale of a late 70’s, 3” Unitron, just like the one I had as a teenager. Luckily,  I found the magazine, and contacted the seller. It was still for sale, and of course I ended up buying the telescope. 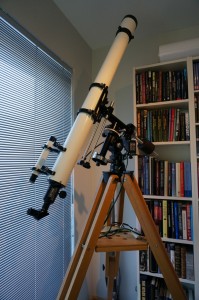 The 3″ that started the process

That purchase made me think about Carsten and his observatory. I knew Carsten had passed away in 2006. In May, I started asking around. I wanted to find out what happened to the 5” and the observatory. Nobody had any information.  Then it hit me. I had an old friend I had not seen for many years, who back in the 70’s had an observing platform at the observatory. I called him, but he did not know anything about the fate of the observatory ant the 5 inch either. After a few days, he came back to me and suggested that we could try to find the observatory. This was early June 2014. He had not been there for 30 years, but we concluded that we could try locating it. The area with the observatory is only 2 hours’ drive northeast of Oslo, but it is in the deep dark Norwegian forests, so this was a little bit of an “Indiana Jones” expedition. 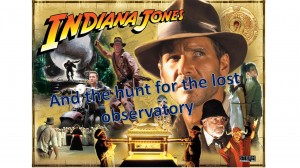 The vegetation, and so the landscape,  change a lot in 30 years, so my friend was unable to recognize where we should park the car, and start venturing into the woods. After talking with some hunters a few kilometers past the right place, we got the lead on where to start our walkabout. They had a hunting post they called “observatoriet”. That sounded like a god place to start. At their suggested place we parked the car, and started walking into the woods. The observatory should not be very far from the road, but the vegetation was thick, and my friend did not recognize the terrain. After a while, I said out of whim… let’s leave the track and go left. After some more walking ….viola, there we could see the observatory between the trees. 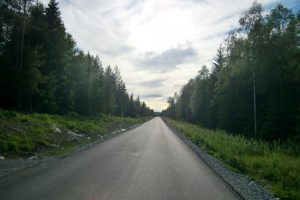 The woods where we began the search 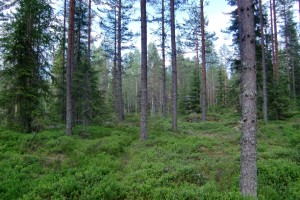 The first glimpse of the observatory 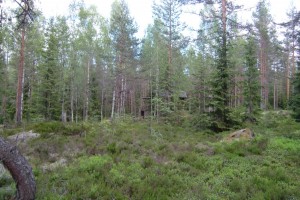 We found the right place!

The building was in bad shape, but it was still standing thanks to the inside brick walls. The planks had started falling off, and the brick walls inside were visible in many places. The two observing platforms were rotting away, but the piers where standing. It is incredible how fast nature takes over. The whole place had a sinister feel to it. 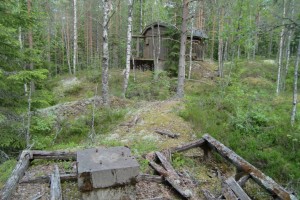 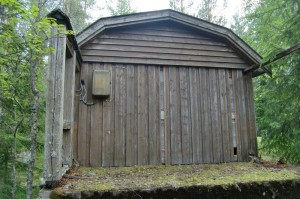 The view from the North 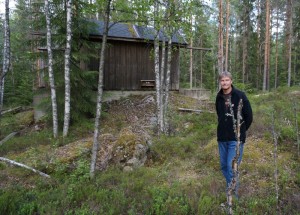 We did not know if the telescope was still in the building, and it was impossible to look in anywhere. Luckily, I had a very small camera with me, and I pressed my hand with the camera in through the small openings I could find, taking flash photos. Nothing… totally black, or……. just the inner brick wall. But wait……. in one picture we could see something white in the corner of the frame……. It was the telescope! Still in there!!! 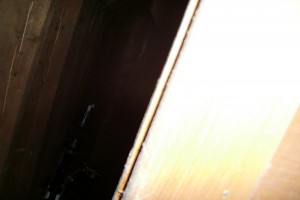 With the building and the roof in such a bad shape, the question was; had it survived?

We could of course not break in…so we had to leave, but at least we found the observatory. When we came down to the road, something strange happened. At the other side of the road about a 100m from the car there was a house.  My friend recognized the person outside the house. It turned out that Carsten’s son and x-wife lived there. My friend had not seen her in 30 years, but she recognized him as well. We talked, and it turned out that the observatory had not been in use for 20 to 30 years.

They gave us access to the building. Back at the observatory, we opened the door, and it was like opening the Tutankhamen tomb. It looked exactly like in the S&T article 40 years back. We went in and were very curious about the condition of the telescope and mounting. A lot of dust, and dead insects of course, but the observatory seemed dry inside, and thank God no spiders (they are not poisonous in Norway, but not my best friends :-). The first on-site inspection showed that the condition of the telescope was surprisingly good. One thing that also got our attention was the bulletin board on the wall with some messages. The newest was from 1986, 28 years ago! 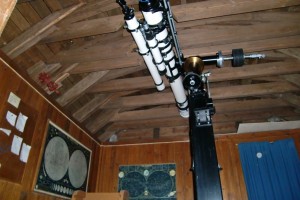 Taken through the door before entering 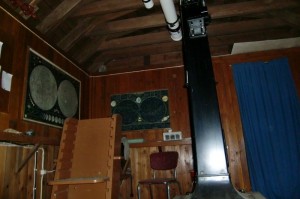 I ended up buying the 5”

It was necessary with two “expeditions” to dismantle it, and transport it back to Oslo. The transport went without incident, but the pier and mounting were heavy. We experienced that the hard way, because some of the bolts were broken, and we were not able to separate the equatorial head and the pier. Therefore, we had to carry it in one piece down to the road. 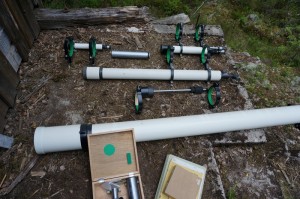 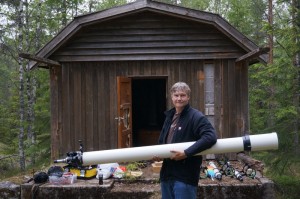 The 5″ OTA in transport 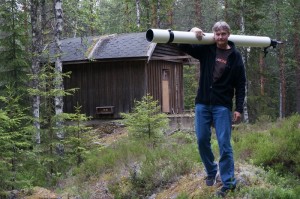 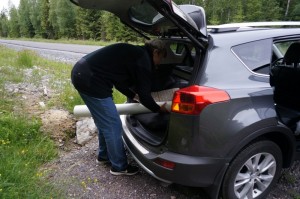 Just barely fit in the car 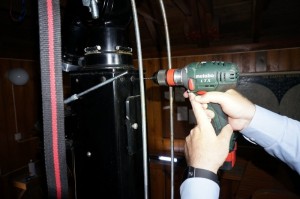 Drilling could not separate the pier 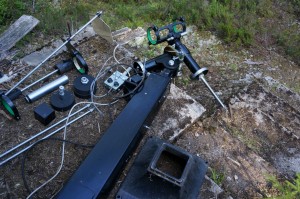 The heavy loads to be transported 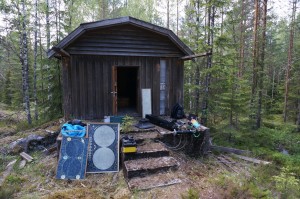 Everything outside to transport

Back home, when I cleaned away the dirt, it looked like the scope was in good condition. Not like new, but in surprisingly good condition.  The biggest concern was the optics. The 5” had a lens cap, but when we took the tube off the mounting, it turned out that the lens cap was the one used during stop-down solar observation. So the lens had been open to the outside air for many years, and looked dirtier than the worst barn window you could imagine. But, I think a good thing with the open lens cap was that the lens could dry. 25 years of temperature variations between +25 and -30 degree centigrade can produce a lot of moisture and fungus. Cleaning the optics turned out to be an easy task. There was no fungus between the elements, so it seems OK. All the finders (75mm, 60mm and a 45mm) had lens caps. The 75mm does have a little fungus between the elements, but I have not built up the courage (and I guess I will not) to split and clean them. 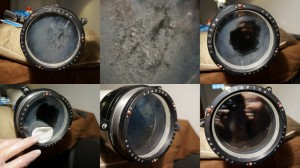 Regarding the mounting, it seems to move freely and is OK. The only thing I have done so far is clean the RA gears and lubricate them.  So the telescope is “restored” back to working order (I think).

It is still in my basement, and I have not star-tested it yet. I am a little unsure of the next step, but to me this telescope is the Holy Grail, so I am happy just to have it in the basement (even if my wife does not look at it the same way).  I can sit watching it for hours. The plan short term is separate it into four pieces and set it up outside the house for testing. If we are two it is manageable. I have mounted the pier on a 22mm wooden plate 1m square, so it will not topple. When it is outside we can star test the optics, and try out the mounting etc. Depending on the results of that test, I will decide on the next step. 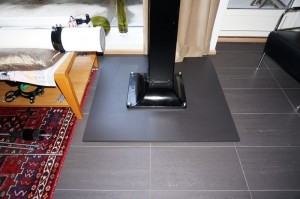 Mounted on a 1 meter plate 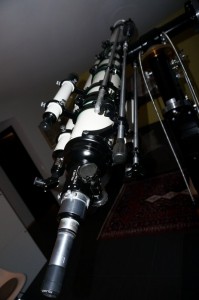 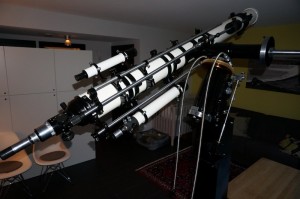 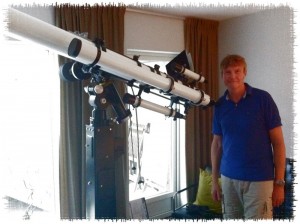 Following are three videos regarding the find. We speak Norwegian in the videos, but I guess the video itself says it all. The first video is like the opening of Tutankhamen tomb. I have acquired the keys, and I am opening the door, and enter the observatory. This is the first time someone has entered the observatory in maybe 20 to 25 years. The second video is also from the first trip, we are looking closer at the interior. The last video is from the dismantling. We have transported the optics to Oslo, and the mounting and the pier were the next parts we were going to move: