It has been a long time coming since those childhood days of daydreaming over Sky and Telescope magazine advertisements about 5 inch and 6 inch Unitrons.  I never really expected to have a personal observatory, nor a fixed pier mounted scope, but the 5″ on a field tripod was a possibility.  With all my moves associated with being in the Air Force for thirty years that dream was pretty much suppressed. 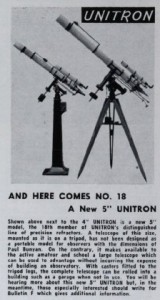 However, on 18 April 2015 at the NEAF 2015 event I pulled the trigger and acquired the Unitron Model 510 that Tom Terleski had so meticulously restored. 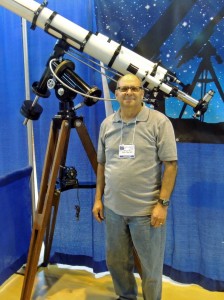 After a few short weeks of waiting, I picked up the scope at Tom’s house on 2 May 2015 and transported it home.  Since getting it back I set up the tripod and mount and thoroughly checked out the electric motor drive.  I found it to be somewhat noisy and after an hour or so of operation it got pretty warm.  I suspect it will need at least a good cleaning and lubrication, at most a motor overhaul.  One other thing I noticed was that the 10X40 viewfinder eyepiece would not screw all the way in.  That has subsequently been replaced and now functions normally. I also re-threaded and replaced the missing screws on the Unibalance assembly and did some restoration of the OTA storage case. 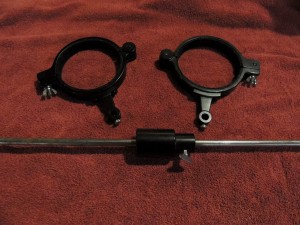 Those familiar with the Model 510 know that the observing weight of the scope is 250 lbs.  In order to facilitate more frequent use and the possibility of transporting to a darker site location, I began to explore options for a more portable mount and tripod combination.  My ultimate goal is to acquire a Losmandy G-11 or equivalent, but in the interim I looked at taking advantage of an upgrade to my trusty Universal Astronomics altazimuth mount.  The first step was to get some tube rings made for an appropriate size Losmandy plate.  In the end I special ordered from Parallax Instruments a set of 135mm I.D.  tube rings and a 13 inch Losmandy plate.  Both of these would be needed for the G-11 mount. 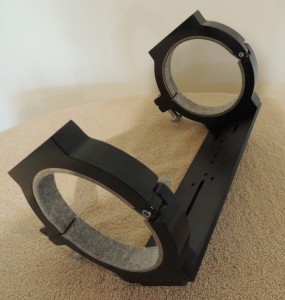 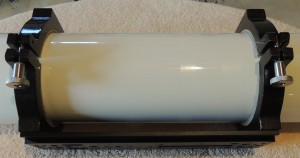 I next ordered the parts to upgrade my Unistar Deluxe Mount to the Super Deluxe with two jaws.  This upgrade comes with a 9 inch saddle instead of the 4 inch saddle and included two jaws instead of the single jaw.  The mount is rated for 30 lbs …the OTA with viewfinder, star diagonal, and 2 inch EP weighs in at just under 29 lbs.  This was obviously close to the limit, but I was willing to sacrifice stability for portability and most certainly a “quick solution” to get the scope out for some observational testing. 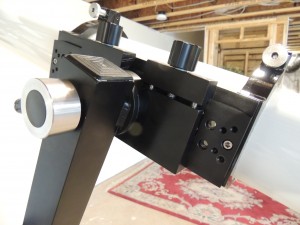 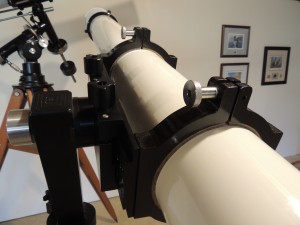 It’s somewhat ironic that it was almost one year to the day that Turk was having his “Father’s Night/ 1st Light 5” Unitron” experience with this very same 5 inch Unitron. There were several differences in my experience last evening, however. All my setup and observing is planned around a one person operation. I therefore decided to give my well tested Universal Astronomics Unistar Deluxe a shot. It’s rated at 30lbs and the 5 inch OTA with viewfinder, star diagonal, and TV EP’s weighed in at just under 29 lbs. Not fully accessorized, but then again, it was the optics I was interested in checking out. The other big difference was collimation. If you followed this thread from the beginning you know Turk had to go through a collimation procedure. A collimation check done a day before confirmed it was spot on. Thanks, Turk! 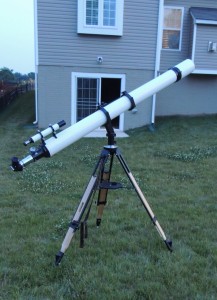 My goal was to check out Venus, Jupiter, Saturn and a few binaries. Where I was able to set up my scope enabled viewing of all three planets and I knew I could locate several binaries within my field of view. Shortly after sunset Venus and Jupiter popped out in spite of the highly LP neighborhood environment I live in. First up was Venus and I was pleasantly surprised at the lack of CA. I viewed it at 42X (48mm Brandon) and then 200X (10mm Radian). The disk was very sharp with almost none of that overpowering “glow”. Probably my best ever viewing of Venus.

Jupiter was next up and at 200X I couldn’t take my eyes off it! The two equatorial belts really popped out, and the north and south temperate belts were clearly distinguishable as well as were other polar surface markings! Given the very average seeing and my very LP backyard I can’t wait to try this scope out at a dark sky site. I did push the magnification up to 333X (6mm Ethos) but the seeing wasn’t really good enough for that much magnification (and neither was the mount). While the surface features got distinctly softer, the disk really filled the FOV!

The results observing Saturn were equally remarkable with a very sharp image at 200X, with nice color, some surface markings and the division very clear and obvious. I could only detect two moons, however.

As far as binaries, Epsilon Lyrae separated just barely at 91X (22mm Panoptic) and was superb at 200X; the secondary of Polaris was a beautiful grayish-green pinpoint at 91X; Albireo looked gorgeous in blue and gold at 91X as well.

I can’t wait to get some lunar and more double star observing in…and getting a beefier mount. For me though that childhood dream has come home!

Had a break in the clouds and relatively clear skies so set up the scope on the recently upgraded UA Super Deluxe Unistar mount to do some lunar observing.  In spite of some slight haze and eventually some bothersome clouds was able to get in about an hour of viewing for myself and a couple of new neighbors who happened to stop by for their first look through a scope.  The UA setup proves to be very mobile and convenient with a 5 minute setup time, but is merely a stop gap measure.  It certainly doesn’t have the stability of the original much heavier Unitron mount and field tripod. 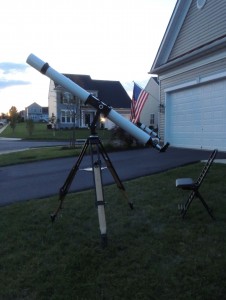 The initial lunar views with the 22mm Panoptic were pretty awesome with no detectable CA at the fringes of the lunar disk.  All lunar features were clear and crisp.  This was pretty much the same for the 10mm Radian.  When I used the 6mm Ethos and pushed to 333x I was very happy with the results.  While there was some softening in the images, they were still quite crisp.  I really need to get a camera so I can record and share these views!!

Finally procured a Losmandy G-11 and loaded up a fully accessorized OTA for a short night of observing a few double stars just to do a test run.  It balanced pretty easily without using the Unibalance Assembly and was very stable.  While it did balance well in both axis I can see the need for an additional 7 lb weight so the 21 lb weight doesn’t set so far down the shaft.  I only observed a few doubles (Mizar, Polaris, Almach, and Eta Cas) because I was more interested in setup and takedown.  As expected though the doubles split cleanly, displaying pin point secondaries especially with Polaris and Almach. 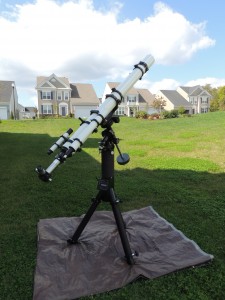 I set up the Losmandy G-11 with the legs extended and for greater stability added a 24″ Losmandy plate instead of the shorter 13″ plate.  I mounted the OTA with only the 10x40mm viewfinder and the Brandon focuser tube with a 2″ star diagonal.

The moon was the primary target for the night although several doubles/multiples were included (Albireo, Almach, Eta and Iota Cas, Beta and Epsilon Lyrae).  Splitting all the doubles was a snap with the stars showing beautiful color and point lights as appropriate.  The triple Iota Cas was especially I also used the 48mm Brandon EP to view the Double Cluster in Perseus and the Pleiades (M45) in Taurus, but the massive LP in my neighborhood plus the bright moon negated any really good views.  I focused my lunar observing on the Montes Riphaeus area to include the craters Euclides, Lansberg and Eppinger; and the region around the Surveyor 3 and Apollo 12 landing sites.  Needless to say the views were crystal clear.  While I can get similar views from my Brandon 94 APO (although not as high a magnification) and my Stellarvue SV110ED, the long tube of the f/16 achromatic refractor and the knowledge that it is a rare 5 inch Unitron adds to the experience…and always will! 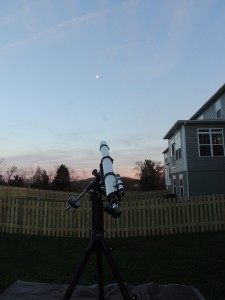 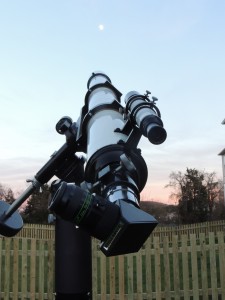 In spite of the forecast cloudy conditions for the evening, I was anxious to get the 5 inch Unitron out for a test drive on my recently upgraded Losmandy G-11. The daytime setup of the 5 inch on the G-11 attracted a few of the neighbors who came over to take a look, and fortunately we did get an opportunity to peek through the clouds at both Jupiter and Saturn. The group of visitors included one adult and seven 5-11 year olds with the kids outlasting the adult (who had to leave with the youngest child). They spent almost two hours asking all sorts of questions, primarily about the “dots around Jupiter” and the “purple lines” on its surface. The oldest in the group was disappointed that the “red thingy” was nowhere to be found. The 5 inch provided great views at 200X using a 10mm TV Radian EP, especially of Jupiter and it’s moons. It was the first time viewing Saturn for most of the kids and, although it was sometimes a fleeting glimpse through clouds, brought the expected positive responses.

As far as the 5 inch and G-11 goes, the scope balanced out easily using the 21lb and 11lb weights and, while I hadn’t attempted a real close alignment, the drive easily held track on the two planets for the duration of our observing time. As one who has spent most of my observing life behind a manual alt-az mount, it is nice to observe without continually adjusting the scope! I’m hoping to get the 5 inch/G-11 away from my heavy LP neighborhood (street lights, house lights, vehicle lights…) and to my dark sky site in the near future for a better observing session. Last evening’s was cut short by the clouds, and by the time I finished with the visitors, I didn’t have much time to explore the capabilities of the Gemini 2 with the 5 inch on-board. 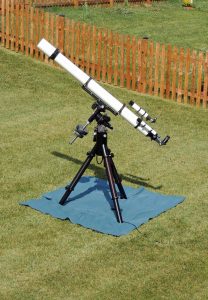 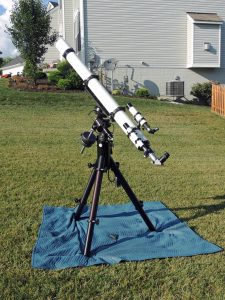 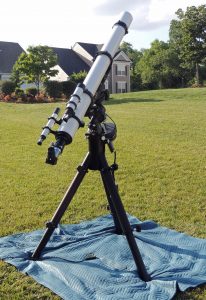